Joe Kuvetakis began his commercial real estate career with Marcus & Millichap in August of 2008 as the bottom fell out of the housing, securities, and stock markets, and as the Great Recession truly began to earn its moniker. With a passion for the business, a healthy fear of failure, and stubborn immigrant’s demeanor he got from his parents, Joe foolishly, yet correctly, convinced himself there had never been a better time to get into commercial real estate.

Like many, Joe didn’t make a dime in 2009. However, by his the end of his second year in the business, Joe was the second highest earner in the Oakland office. By his third year, he wanted to expand his business beyond investment sales, and have a more direct relationship with the retailers and developers that made the retail sector go. In August of 2011, Joe joined John Cumbelich & Associates to do just that.

Joe represents and understands a broad range of rapidly growing retailers in Northern California and beyond. From grocers such as Smart & Final, to travel centers in Pilot Flying J, fast food users Dunkin’ and Wendy’s, jewelry boutiques like Forevermark, and retail entertainment concepts such as Studio Movie Grill.

Additionally, Joe’s business places an emphasis on his foodie leanings as he represents several highest-in-quality, and best-in-category Northern California specialty restaurants like ROAM Artisan Burgers, Todos Baja Grill, Samovar, Bierhaus, and many others.

In addition to his tenant representation services, Joe assists a number of REITs, developers and landlords in acquisitions, dispositions, and in leasing their first class properties and development projects throughout the throughout the Bay Area.

Joe’s core beliefs are to put his clients’ needs as people first, to always take the high road, to see his projects through to completion, and to pay it forward. His passion for retail continues to grow as he has seen the positive effects it can have on the surrounding markets and communities.

Mr. Kuvetakis holds a Bachelor of Arts degree from the University of California, Los Angeles.

Mr. Kuvetakis is a member of the International Council of Shopping Centers, and the ICSC Next Generation, and X Team International. 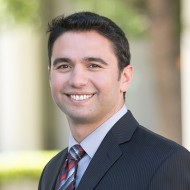